Conexus Indiana honors Albert Chen, Telamon Founder and Executive Chairman of the Board, with 2021 Andre B. Lacy Vanguard Award 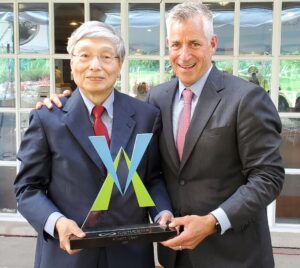 Albert Chen, Telamon Founder and Executive Chairman of the Board, has been named the 2021 Andre B. Lacy Vanguard Award recipient, joining an exclusive group of industry leaders recognized for extraordinary leadership and impact.

Conexus Indiana presents the Vanguard Award each year to a Hoosier leader who champions the advanced manufacturing and logistics industries, models civic and philanthropic leadership and demonstrates a visionary perspective that challenges the status quo. The award is named in honor of philanthropist and business leader Andre B. Lacy who left a large footprint on Indiana as a third-generation leader of his family business, Lacy Diversified Industries Ltd. (LDI). He passed away in November 2017.

“I am honored to recognize Albert for his 40-plus years of entrepreneurial success, focus on advanced manufacturing, job development, philanthropy and significant impact on the Asian American community,” said Mark Howell, president and CEO of Conexus Indiana. “Our advanced manufacturing and logistics industries are stronger and more competitive, the workforce of tomorrow has better tools and pathways to rewarding careers and Hoosiers have so many opportunities for success because of Albert Chen.”

Chen founded Telamon in 1985, providing supply chain services to the telecommunications industry. The company had $770 million in revenue by 2019 and 17 domestic and 3 international locations. Today, the routing, switching and optical equipment that power much of the nation’s 5G network pass through Telamon warehouses every day.

After Chen transitioned the leadership of Telamon to the second generation in 2015, he launched a new business, Telamon Enterprise Ventures, a start-up that achieved profitability within 3 years, and then Telamon Robotics in 2020 to offer smart manufacturing solutions for small-to-medium-sized manufacturers in Indiana. Today, he serves as Executive Chairman of the Board for Telamon.

“My father represents the immigrant population who came to the US with very little yet accomplished very much,” said Stanley Chen, CEO of Telamon and Albert’s son. “From his arrival to the US in the 1960s to today, he learned to speak English, built the largest minority-owned business in Indiana, employed over 2000 associates globally and created two non-profit organizations to build up and recognize Asian Americans.”

Albert founded two nonprofit organizations, the Asian American Alliance in 1999 and the America China Society in 2013, to build up and recognize Asian Americans.

“Indiana is better today because Albert chose to make America, and later Indiana, his home,” said Mitch Daniels, president of Purdue University. “He has brought talent to our state, provided jobs to thousands, and built relationships that continue to feed Indiana’s economic growth. As a living embodiment of the American Dream, he now uses his success to help others realize their aspirations, including the founding of the important Asian American Alliance and the Asian Learning Center of Indiana. His character, innovative mind, and commitment to Indiana are all reasons why as governor, I relied on him for help on many occasions and was one of his biggest fans.”

Chen also is a champion of tomorrow’s technology talent. Through his dedication and support, students and working adults have access to curriculum and training in Industry 4.0 technologies – such as cobots – that are redefining how things are made and moved.

His commitment to education extends to the IU School of Informatics, Purdue’s Burton D. Morgan Center for Entrepreneurship and the Butler University Board of Trustees, as well as Vincennes University. Also, with his wife, Margaret, he has established minority scholarships for students at IU, Purdue, Butler and Portland State University.

He gives generously to the community and in 2016 he and his family created the Telamon Foundation, which gifts approximately $100,000 annually to local organizations focusing on culture and the arts.

Conexus Indiana presented the Vanguard Award to Chen on June 8, 2021, during a reception in Indianapolis. Andre B. Lacy’s sons, J.A. and Peter, joined industry, education and philanthropic leaders in honoring Albert.

“My dad wanted to teach future leaders about capitalism and why it works; the value of hard work and opportunity that comes from it. Albert’s life story definitely is a testament to the virtues of capitalism,” said J.A. Lacy, CEO of LDI Ltd. “There is one way Albert departs, admirably, from my dad. Andre institutionalized high governance standards and values at LDI so the company would not be dependent on him or any one individual. Albert has done the same at Telamon.  But my dad struggled with letting go emotionally after putting so much of himself into building LDI.

“Several years ago, I was honored when Albert, Stephanie and Stan asked me to join Telamon’s board, and through this experience, I’ve seen firsthand the space Albert has created for the next Telamon generation to find their own voices and establish their own legacies.”

Telamon Corporation’s mission is to “enable connectivity that enables life”.  Telamon specializes in solutions for telecommunication networks and industrial assembly. Based in Carmel, Indiana, Telamon operates globally on three continents. Telamon, the Greek word for “support”, is uniquely positioned as a minority owned company. Telamon continuously exceeds customer expectations and standards and has been recognized globally through numerous awards and certifications. For more information, please visit Telamon’s website at www.telamon.com.